Through My Eyes: An Exhibition by Paul Johnston 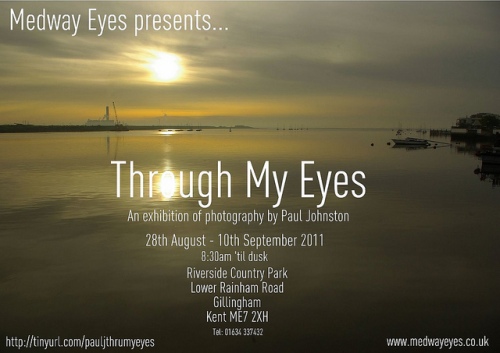 Paul Johnston is a Medway based photographer who has received huge acclaim for his contributions to Medway Eyes group exhibitions Look At Medway, Tidal Flow, Sight Unseen and Unframed in the past three years or so. This month, he steps forward to present his first ever solo exhibition at Riverside Country Park. Expect the River Medway to be a feature, but also look out for early mornings, singular takes on familiar subjects and a wry underlying humour in Paul’s work.

The exhibition is free and runs from Sunday 28th August to Saturday 10th September. You can preview the exhibition on the afternoon of Saturday 27th August from 1pm, when Paul and the team will be having lunch in the picnic/playground area. 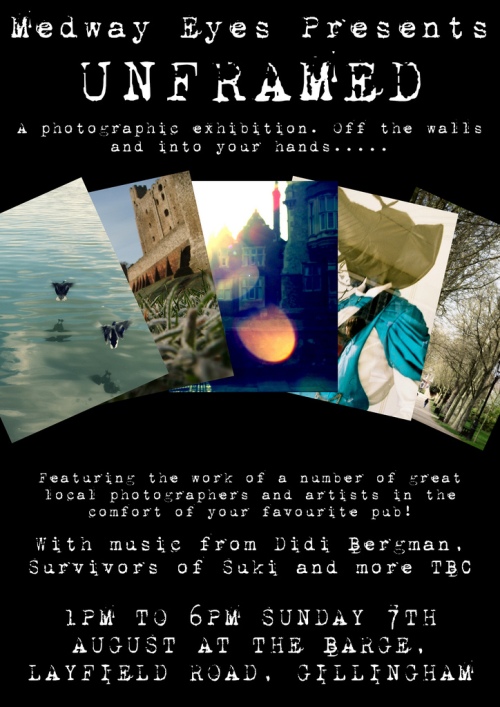 We enjoyed last year’s Unframed exhibition at the Barge so much that we thought we’d do it again.  Click on the poster to download it, spread the word and join us for a portable, accessible exhibition by local photographers wrapped up in a family friendly afternoon of live acoustic music from Didi Bergman and Survivors of Suki. Check out the Facebook event here.

From Here To Halloween

How time flies. The solstice is upon us already and we’re halfway around the sun again before we know it. So far this year, we’ve managed two well attended exhibitions (the first of which exceeded all sorts of expectations) and three cracking gigs, which is good going – but we’ve been back to the drawing board and come up with a schedule of events which we thought you might lke to put in your diaries, be they wirelessly networked or moleskin bound.

Firstly, and not yet fully confirmed, we have a couple of picnics lined up for Sundays during the school holidays. We had a few of these last year at Victoria Gardens in Chatham and a splendid time was had by all. More about these as their arrangements progress. Equally unconfirmed is a potential collaboration in the organisation of something really rather big and groovy over the August bank holiday weekend. Again, more on that later.

The following dates are definitely confirmed, and full details for each of them will be blogged here in the coming weeks and months:

The afternoon of Sunday 7th August sees us at the Barge in Gillingham for Unframed 2011, a family friendly event which, just like last year’s, will see local photographers bringing albums of their work to show and share while everyone chills out and enjoys good company, live music and sunshine (hopefully). Later in the month, on Saturday 27th August, we’ll be helping photographer Paul Johnston open a solo exhibition at the Riverside Country Park in Gillingham by, well, hanging around in the sunshine (that word again) while the kids let of a bit of steam in the playground area. Join us that afternoon if you will. The exhibition runs until Saturday 10th September, and Paul is our featured photographer on this very blog (over there on the right).

Don’t despair about Paul’s exhibition closing though. Instead, come back to the Barge with us on the evening of Saturday 10th September to hear some of Medway’s finest musicians and songwriters covering the songs of other Medway performers, many of them stories about the towns and people themselves, at the start of what will be an ongoing Medway Eyes project designed deliberately to praise and point up the towns and their many talents. This will be a fundraiser. We’ll be doing some good while we enjoy ourselves. We just need to decide who we’ll be doing it for.

Fast forward to Friday 7th October which will see us celebrating our third birthday by launching our third compilation album with live music at the Nag’s Head in Rochester. Both the album and the gig will be much like ME1 and ME2 (i.e. brilliant). Again, full details nearer the time.

Finally (at least for now) put Saturday 29th October in your diary for some spooky graveyard storytelling and dark doings at the Barge. It’ll be a scream…

That’s it for now. Sketchy in places, yes, but a date is a date, and at least you know as much as we do now.

Eyes All Around: Opening Night 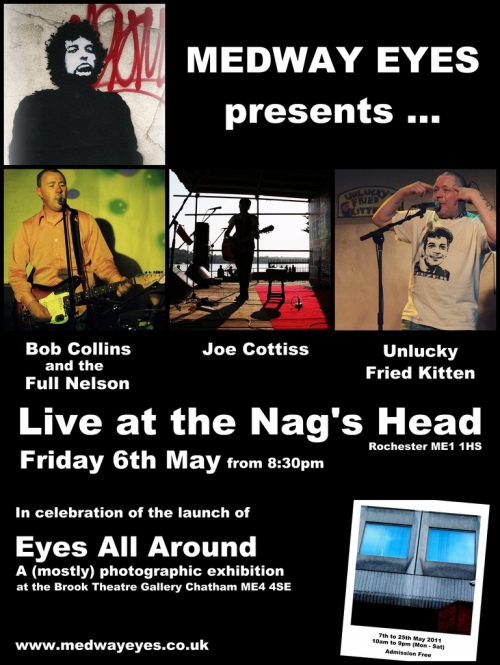 We’re delighted to announce a cracking line up for the opening gig for the Eyes All Around opening on Friday 6th May. We are proud to present the legendary Bob Collins with his band The Full Nelson, ably supported by punk poet and gentleman raconteur Unlucky Fried Kitten and the hypnotic Joe Cottiss.

All are welcome to the opening of the Eyes All Around exhibition, which takes place between 6:30 and 8:00 pm at the Brook Theatre Gallery, and we’d be delighted if you would join us for this gig just down the road afterwards, from around 8:30.

Exhibition: Eyes All Around

And there it is.  Everything you need to know about the next Medway Eyes exhibition.  We’re going for a less formal approach this time, with contributions from fifteen local photographers and artists.  As the press release says, there’s a lot going on in the towns that needs pointing up. That’s what Medway Eyes is about, and what this exhibition aims to achieve.

There will, of course be an opening between 6:30 and 8:00 pm on Friday 6th May, so you can come and meet some of the contributors and find out more about them and Medway Eyes.  In the grand tradition, there will be a gig afterwards to celebrate the opening. More details on this blog very soon.

Two Sides of the Same Coin: An Update 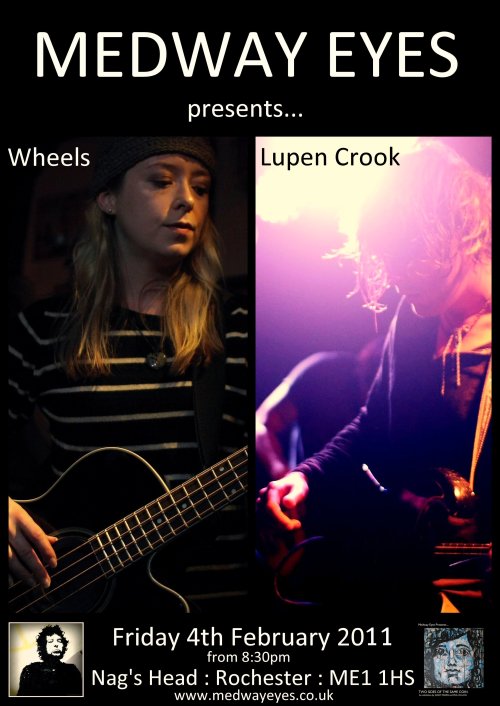 We’ve had a few questions about this coming Friday, so it seems like a  good idea to post a potted itinerary. Plus, we’ve got some news. Our regular readers will all by now be aware of the exhibition Two Sides of the Same Coin (see Eyes passim) that opens between 6:30 and 8:00 pm on Friday 4th February at the Brook Theatre in Chatham. This preview, to which you are all invited, is just the first half of what promises to be a belter of an evening. From 8:30 pm we have a stunning line up of live music at the Nag’s Head in Rochester. Wheels and Lupen Crook will be sharing the bill, and we’re delighted to announce that they are being  joined by very special guest Dave Read, formerly the front man with local legends The Claim, and one of the finest songwriters we can think  of. So there.

The exhibition itself showcases the stunning work of artist  Daisy Parris, supported by photographer Phil Dillon. It’s about local influences and talent and is as much about the fellow creatives the work points up as it is the artists themselves. Ultimately though, it’s about Medway, its culture and its catalysts.

Daisy and Phil will be on Fizzer’s radio show on Radio Sunlight tomorrow night from 8pm, as indeed will Wheels. There’s also an exclusive and refreshing interview with Daisy at the Medway Broadside.

Two Sides of the Same Coin

Medway Eyes
Create a free website or blog at WordPress.com.